(Just typing that subject line made me smile. 'Castles' was the working title of my first novel. Although I still believe in the story, some of it is almost painful to read it's so self conscious. But this post isn't about that story. Sorry, Lisbet.)

I just watched a movie called "I Capture the Castle" based on the novel by the same name. I read the book probably a dozen years ago or so, but it stuck in my head. I'd actually forgotten it was, in part, about a blocked writer. I was looking for movies about writers and was surprised to see that one on the list. And, lucky me, it was available to stream on Netflix AND I actually had time to sit and watch it. 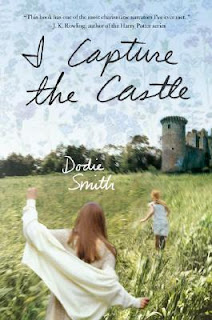 I'll skip over the plot and synopsis and all those sorts of details in favor of one scene that captured my imagination. The father had published an acclaimed novel twelve years before the story opens. He hasn't been able to write since (for lots of reasons) and he is slowly going over the edge. In an attempt to help him start writing again, his daughter and son lure him to bring his typewriter to a landmark of their childhood - a free standing castle turret. Probably the rest of the castle had crumbled centuries before. Anyway, they all climb down the ladder to the grassy floor of the turret, where there is an old iron bedstead. They help him set up his typewriter, toss a picnic basket toward him, and then they climb up the ladder and take it with them. He is effectively trapped in this turret with nothing but his typewriter, and told they will not release him until he writes 50 pages.

Think about that. No phone, no television, no internet, no people, no internet, no nothing except you and a keyboard. Or maybe just a notebook. Food and drink supplied. . . . Heaven or hell?

I think this might be the writer's version of "If you were trapped on a desert island, and could only have one book, what would it be?"

I CAPTURE THE CASTLE is one of my favorite novels in the whole world! (The movie...not so much.) My writing castle would be...somewhere near an ocean where I could take walks on the beach for inspiration. And the pantry would be stocked with unlimited chocolate, coffee and wine!

Your writing castle sounds great (especially the chocolate part!). My writing castle would be up in the mountains, in the pine trees, with a view of mountains and pines and blue sky. Sit out on the deck and smell the pines...
That's one of the reasons I chose Palouse Divide Lodge for the retreat (I can't wait for the retreat!!!)

Years ago (when researching for Airplane Dreams... remember that?) I booked a cabin in the woods for two days. No TV. No Internet. No kids. No cell service. Just me and my computer. Honestly? The first few hours weren't productive at all because I was so intimidated by the expectation (I booked that cabin so I could *write*, dammit), but then once I relaxed, it was perfect. No distractions - especially not my favorite one: getting lost online doing "research".

Thanks a lot for mentioning I Capture the Castle is available on Netflix. Now guess what I have to watch today? : )